LED (Light Emitting Diode), LED is a solid-state semiconductor devices, it can direct the light into electricity. The heart of LED chip is a semiconductor chip is attached to one end of a stent, this end is negative, the other end to connect the positive power supply. And the whole package together chip by epoxy resin.

When the current through the wire act on the chip, the electrons and holes into the quantum wells will be in the quantum well with electron-hole complex, and then will be issued in the form of photon energy, which is the principle of light-emitting LED. The wavelength of light is the color of light is the formation of PN junction by the decision of the materials.
Conventional LEDs are made from a variety of inorganic semiconductor materials, the following table shows the available colors with wavelength range, voltage drop and material: 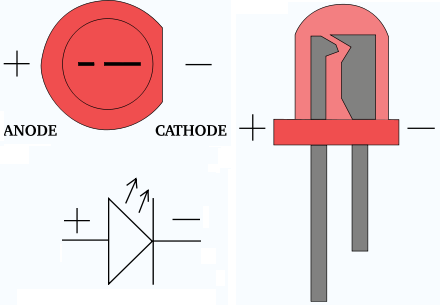